Running a business or marathon, Swistun delivers on his promises 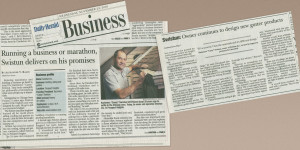 Running marathons and building a business go hand in hand for Kazimierz “Casey” Swistun. They both exemplify his philosophy of attempting what some people say is impossible.

Immigrating to Chicago from Poland 21 years ago, Swistun spoke little English and was strapped for cash. He got a job as a contractor’s helper.

The former machine engineer learned all he could about siding, roofing and gutters on houses. Little by little, he bought his own equipment and saved money, too.

Within two years he started his own roofing, siding and gutters company called Swistun Inc. in Prospect Heights.

The 53-year-old compared building a business to running grueling marathons.

A decade ago, Swistun almost gave in to blistered feet and haggard toe nails halfway through his first 26-mile run.

“I visualized my hands up crossing the finish line,” Swistun said.

He finished that race, but it took his body about a week to recover. “I couldn’t move for three days,” he said. “I stayed in bed.”

Since then, he finished five Ironman triathlons and a couple of 50-mile runs.

Three months ago, he woke up feeling great, he said, after a 100-mile marathon in Kettle Moraine, Wis. “If you want to achieve something you have to set your goal and visualize yourself finishing,” he said.

He tries to be as persistent with his business and a bit out of the ordinary. Instead of asking for a down payment from a customer before doing a job, he does the opposite. Swistun offers customers a 5 percent deposit, up to $500, that they can keep if they think the job was not done right.

Asked if customers have kept the money, he smiled and affirmed, “very few.”

Alexandra Brook returned the deposit when Swistun replaced a dozen windows and the patio door of her Glenview home a few years ago. “They care very much about the quality of work they do,” she said. “They’re professional, organized and good about communication.”

She also was impressed with Swistun’s Web site that explains how far along the project is and what materials were ordered. The company replaced her roof last year and she posted an enthusiastic review on Angie’s List, a homeowner’s Web site.

He patented InvisiGuard, a product that blocks debris from clogging gutters.

Like his first attempt at running a marathon, the gutter guard needed improvement. It didn’t work against ash tree seeds and long needle pines.

“It’s a process,” he said. “I buy the materials and try different things.”

Two months ago, Swistun patented IG2, an improvement on InvisiGuard that uses a stainless steel mesh to stop all debris from passing through.

“This one really works. No overflows, gutter clogs or system clogs,” he said. The guard also has ridges to prevent the water from hydroplaning across it, missing the gutter.

He said many U.S. and foreign companies are testing the product.

“I’ve had great luck with it,” said Seth Barnett, president of Barnett Construction and Seamless Gutters Inc. in Wakefield, R.I. He was one of the first customers to buy the guard, which Swistun now sells to companies in 13 states.

“I look forward to seeing it get through the winter,” Barnett said.

Swistun is wrangling out details with a gutter parts manufacturer in Franklin Park to mass produce IG2 and is launching a marketing campaign.

That’s a new step, too. Previously the company did no advertising.

“They like it,” he said, showing off a printed e-mail from South Africa. The e-mail said the South African company, which Swistun did not want to identify because no agreement has been signed, was “impressed with the simplicity and practicality of the InvisiGuard.”

Another e-mail, from a British company, said it found no problems with the product but the company still has to test it on an 18th-century church near London. “It can be used on any kind of roof,” Swistun said.

He has high hopes that this invention will out-perform his first.

Even out of college, he developed a way of cinch-packaging chicken for shipment.

Trying to capitalize on what he deemed inefficiencies in food distribution, Swistun said his invention would leave each whole chicken wrapped air-tight in plastic, on a conveyer belt.

“It would have worked,” he said with a chuckle. “But it was never built.”

View all posts by: kswistun